The Atomic Robo Roleplaying Game was nominated for a 2015 Origins Award. To celebrate our inevitable loss to a D&D product, we've added some Robo RPG books and dice to the online store.

But that's not all!

We're offering a combo pack that gets you the dice and the book with the coupon code ORIGIN2015 for 10% off your purchase.

How can you resist it? 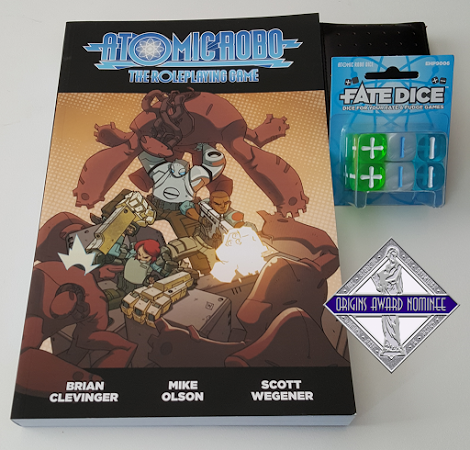 Hope you guys enjoyed reading The Flying She-Devils of the Pacific. It was a tough one for us. We'd been talking about it since we finished Fightin' Scientists of Tesladyne. We kept pushing it back because we knew we weren't ready. Scott's art wasn't up to snuff and I could barely keep a story going for more than one issue.

We figured out that we'd never really be ready for it. So one day we just decided to stop running away from it and do the damn story.

This week we're bringing you The Savage Sword of Dr. Dinosaur. For the first time it's a direct sequel to a previous storyline, The Ghost of Station X. For those of you reading it for the very first time as we're putting it online, I'll just say: if you think we've ever done a cliffhanger before, wow, are you in for a heck of a ride. And it's not gonna end for a while.

Meanwhile! We've got some super huge news coming at you guys in the next month or so. I hate to be so cagey about what we're brewing up, but argh, you guys. You guys!

Okay, fine. I'll give you one little glimpse of one of the things. 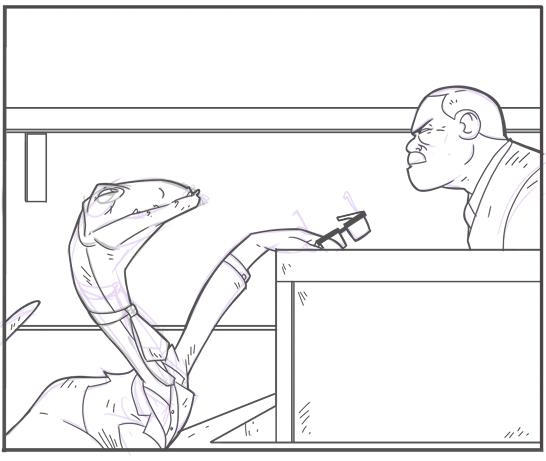 What could it beeeeee?

If you'd like to participate in our letters column, just sign up with the ol' Patreon and send us a dang letter!

It’s a tremendous amount of fun to play with historical figures, that’s why we use them so often!

There’s no set ratio of realness to fictionality. We do our best to stay true to the spirit of the historical personality because what the hell is the point of putting them into your story if you’re going to make up a character for them? Just to have a famous name associated with your own? Sounds kinda crappy to me.

That said, we aren’t slaves to historical fact either. We got big fun time sci-fi stories to tell. And, I mean, Atomic Robo himself is the most historically inaccurate thing in the pages of Atomic Robo the comic book. But Tesla was one of our earliest pioneers in what could reasonably be considered robotics, so while it’s impossible for Atomic Robo to be made by Tesla, at least it’s within the purview of Tesla as a character to make something like Atomic Robo.

Similarly, Edison never pursued an immortality formula as we posit in Volume 5, but he was definitely an ambitious business man and innovator who dabbled in spiritualism.

Ever since we read volume one both my dad and I have loved Atomic Robo. Obscure science! History! Robots punching things! It's all here! I have volumes 7, 8, and 9 right next to my bed ready to read. We've got the Patreon too, and the RPG. But enough gushing about this awesome action science comic. It's time to turn on the swinging lamp because I have some questions for Brian and Scott! Respectively!

Brian- Do you have any plans to include Sergei Korolev in the future? He's a great obscure science guy who spearheaded the soviet space program.

Scott- What's the secret to the Wegener crud/weathering surfaces?

No specific plans for Sergei. Yet. But don’t worry. I’m a huge fan of the space race, especially the early Soviet efforts. We’ll soon plant some seeds that could lead us to elaborating on what our version of Sergei got up to back in the day. Stay tuned!

Scott had this to say about his cruddiness…

There's no real secret to be honest. When I first started drawing comics I just wanted things to look kind of scuffed up and gritty. As a kid Star Wars looked like this totally lived in and thus believable universe, and that always stayed with me. I loved the abstract way that Mignola did that, so I just applied little abstract shapes to anything and everything because I thought it looked cool.

In other words I had no idea what I was doing, so it was successful about 50% of the time.

Eventually I started looking at this desire to create a specific look with some purpose. In The Deadly Art of Science I stopped inking my work and switched to very tight pencils instead of inking the pages.It's very easy for pencils to look muddy and just kind of gross and I wanted very much to avoid that. I wanted a nice clean and almost animated look to things. So I was no longer able to do any sort of shading because the pencil strokes would always show up no matter how careful I was, and I found it kind of broke my own immersion in the fictional world we were creating.

I have learned, literally through years of trial and error, to use my crud/weathering as a shorthand to stand it for the visual depth that would normally be created with cross hatching and spot-blacks. Obviously my colorists also play a huge role in this. I find that when I get it right, the scuffs and stains that I use help create a sense of volume to characters and objects that would otherwise look very flat and bland. So I decide who or what needs to really pop and what can fade into the background, and then go to town making a thousand little tick marks on each page.

Here’s the best links turned up by my research and general internetting last week. I offer this as a service to you weirdo degenerates who unaccountably do not follow me on Twitter.

Augmented vision while driving couldn’t possibly backfire and especially not at highway speeds oh my god what are you people thinking? - The Verge

Quantum communication gets a little more possible with fibers that can bring light to a practical standstill. - Phys.org

Wish we could've made it out to ECCC. It's probably tied with HeroesCon as our favorite convention. There's just too much happening on the home front right now for us to jet over to the Worst Coast.

OH SNAP SON YOU SEE WHAT HE DID BOOOOOOM

Hope everyone's having a good time over there and to see see you at the next ECCC.

First, here's some kind words about Atomic Robo from the dorks at GeekDad.

Third, you may have noticed last week's livestream died. Our private test run earlier in the week went smoothly, but setting up the real one was a nightmare. We eventually called it off but kept poking at it to find out WHY WHYYYYYYYYY.

And I think we figured it out. We'll run a new sorta open test soon and see how this new set up copes with other human being looking at it.

Whoops! Meant to advertise this earlier in the week, but I've been up against a hell of a deadline for The Phantom and kinda sorta forgot about everything else in the world.

We're gonna do a live stream for our Patrons tomorrow, Friday March 20th, at 7:30pm Eastern.

Scott and Brian will take questions from whomever the hell shows up while Scott draws an all new cover. I think it's a cover? Whatever, it'll look cool and you'll see it happen as if by magic before your very eyes.

Stay tuned to this website, our Twitters here and here, and Patron feed for the URL when the event looms nigh.

Just a quick note for everyone who wanted to know when Atomic Robo and the Knights of the Golden Circle would be available through Amazon. Uh, it is!

You can also buy it online through Midtown Comics or your favorite online retailer. Definitely check your local shop too.

The collected edition is not yet on comiXology, but we're working on that. Meanwhile you can grab the individual issues if you're getting impatient. 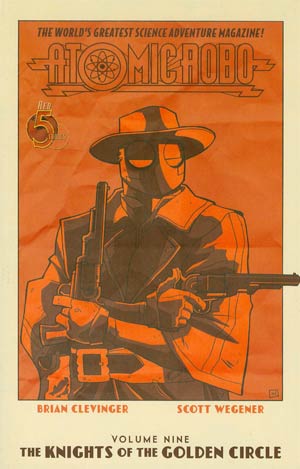 Baron Heinrich von Helsingard is poised to conquer the Old West with his invincible army of automatic soldiers and the war zeppelin Basilisk. Atomic Robo, Doc Holliday, and U.S. Marshal Bass Reeves are all that stand between him and total conquest. But they're outmanned, they're outgunned, they have no good plans, and there's no way out alive. Oh, and Robo's nearly out of nuclear fuel because it's 1884.