We revealed the deluxe bookplate in our latest update. This is a special one-of-a-kind bonus going to any backer who grabs all nine hardcovers. Behold! 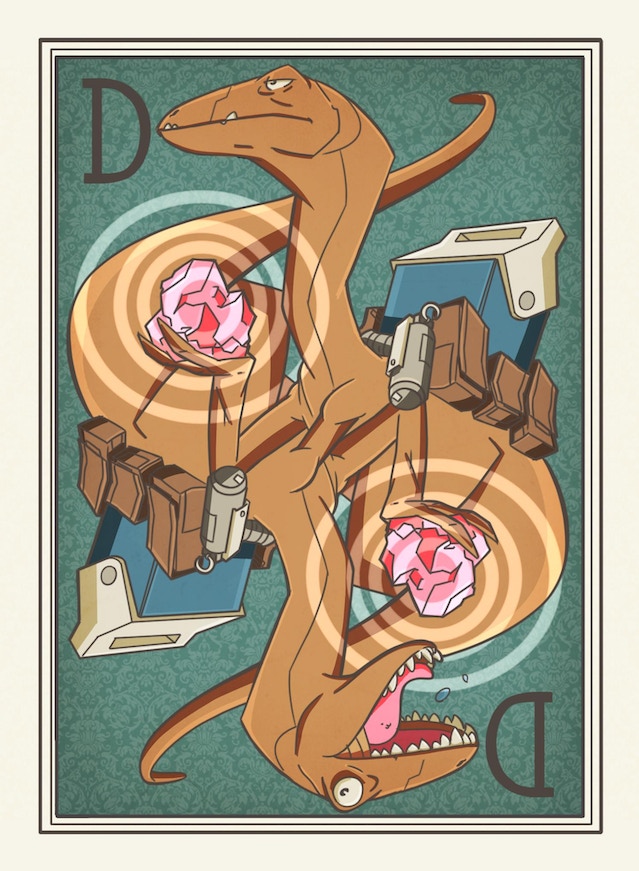 Meanwhile. You pushed us over $120k. Jerks! Now I've got even more work to do because we're committed to delivering an all-new volume of Real Science Adventures about the early days of The Flying She-Devils of the Pacific.

It won't be an origin story. That's boring. They found each other. It will be the story of their first big heist/caper. Similarly, The Deadly Art of Science wasn't Robo's origin either, but it was his first big adventure. And we all got a kick out of that.

What's next? Let's take a look! 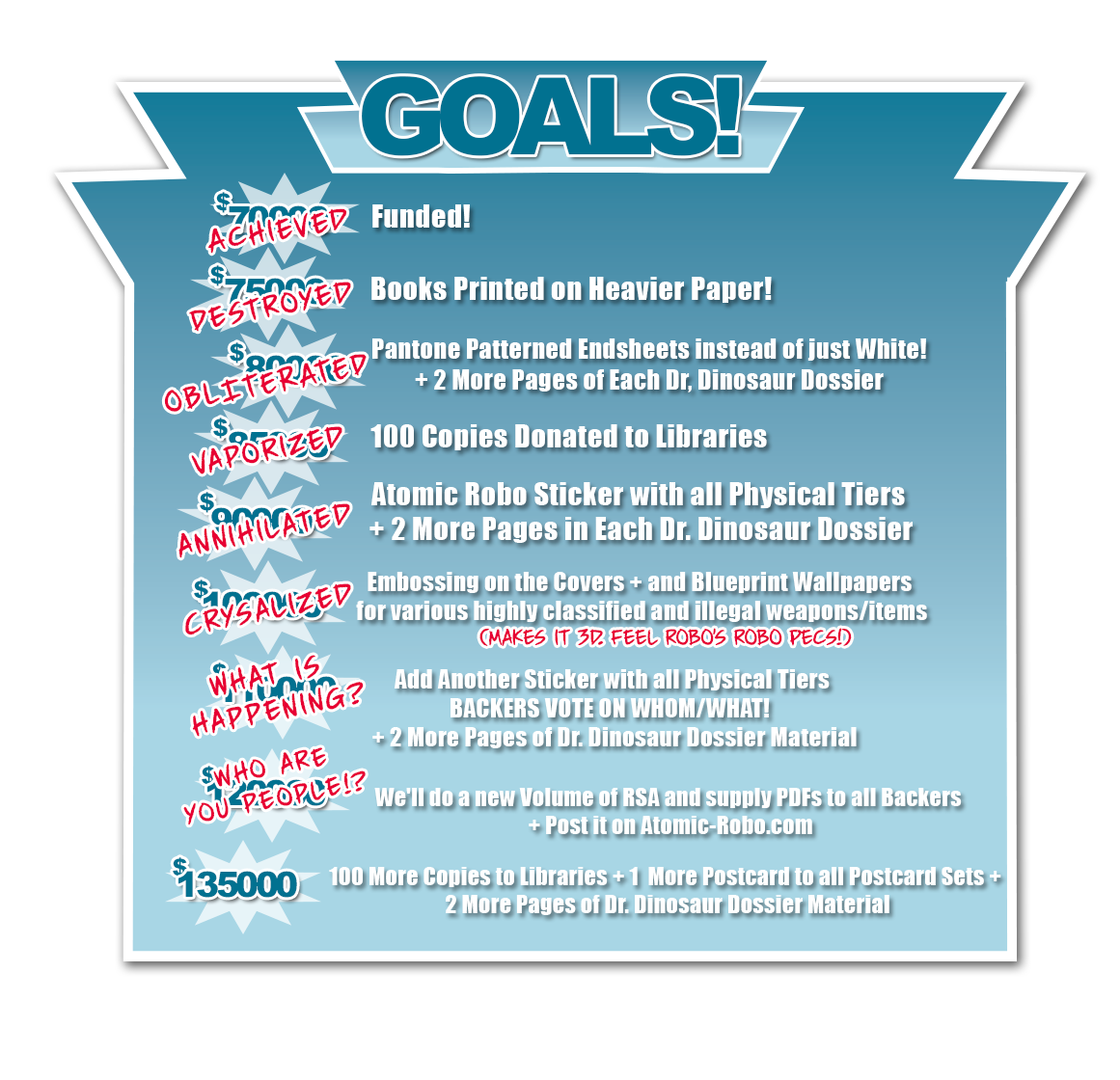 Why do I keep agreeing to stretch goals that make me work more and give away our books? I must be an idiot. Punish me with dollars.

The first page of our second mini-prologue starts today. It stars a gal you've seen before. So, yes, that means our first mini-prologue concluded over the weekend because we're crazy enough to update seven days a week now. Maybe you missed a page, I dunno, so start at the beginning just in case.

The Kickstarter is still forging ahead. We've got some cool reveals for you today.

I'd like to reveal the first of our guest postcards. These are included in a bunch of our reward tiers as free bonuses because we love you(r money).

Tessa Stone (of Twitter and Tumblr) was kind enough to hit us up with this little number. 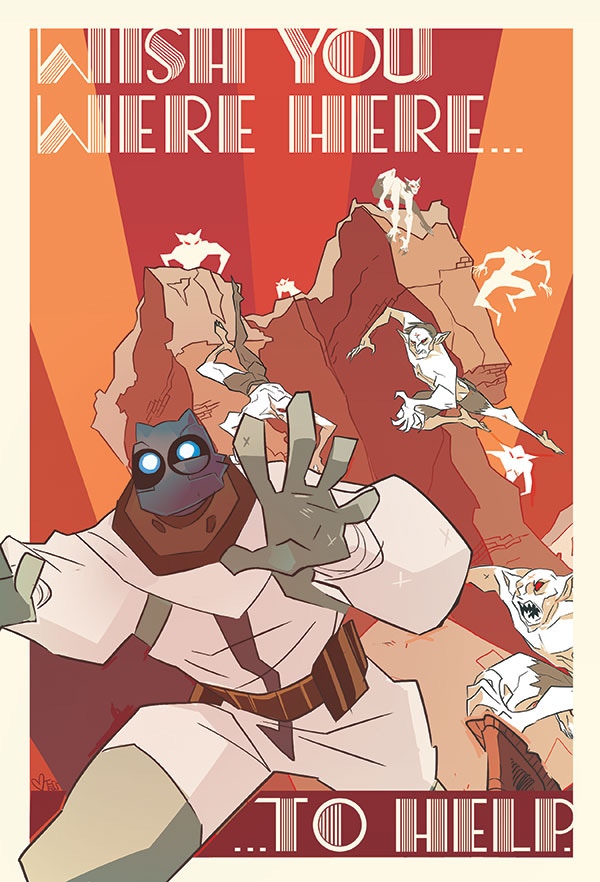 And we revealed the $120,000 stretch goal: a new volume of Real Science Adventures. Ninety-six pages, probably starring The Flying She-Devils of the Pacific. All backers will get it in PDF. Don't worry, the rest of you slobs will get to read it online eventually. 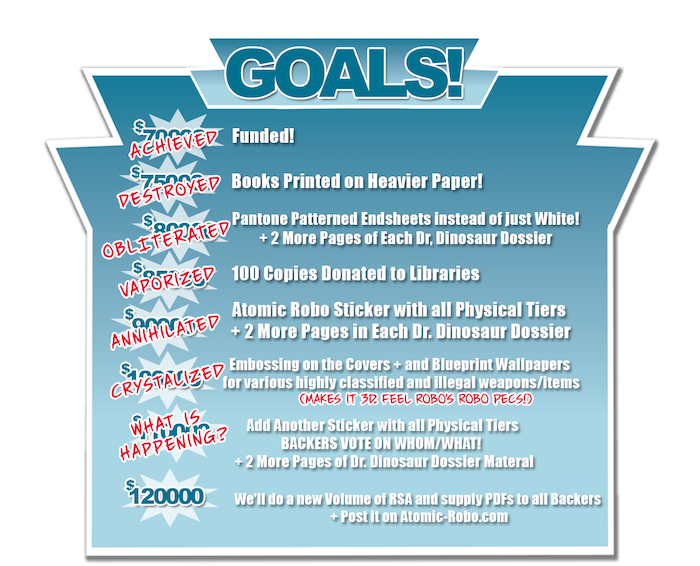 You've got until next Thursday, June 5th to get on that action.

Scott did us the favor of talking through the design process behind the new cover for Dogs of War.

Now that you've cracked the $100k barrier, there's a stack of great stretch goals looming ahead. But for right now, we're staring down the barrel of $110k. At that level, all physical orders are getting another sticker and we'll put two more SECRET FILES OF DR. DINOSAUR in every single volume. That brings it up to six pages per book for a total of fifty-four pages of total sanity.

Damn you. Damn you all. 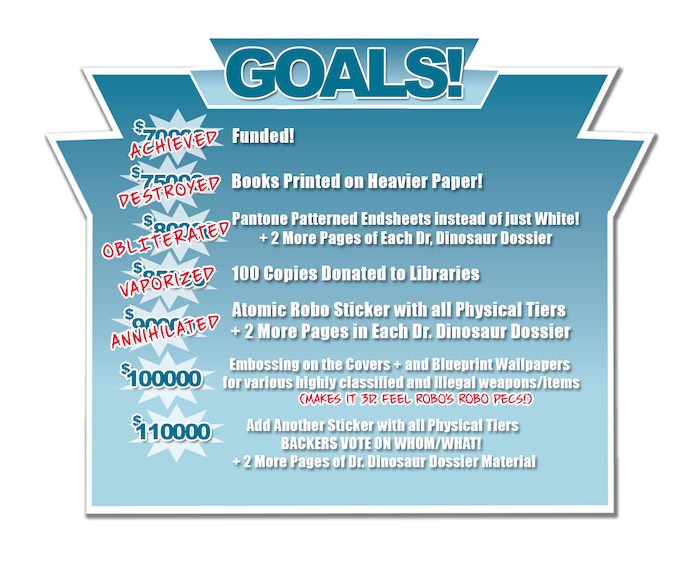 Atomic Robo and the Ring of Fire started yesterday. We went back and forth on what our new update schedule should be, and here's how it breaks down.

Three pages a week was too slow. It'd take, like, 8 or 9 months for us to publish a single volume online. No fun. Four pages per week would quickly overtake our production and we'd have to go on regular hiatuses to catch up. Lame. So, we settled on half a page seven days a week. At 3.5 pages per week, you'll get a full volume faster, but it won't be so fast that we have to hit Scott any harder than we already do to keep up.

Hey. Let's talk about that Kickstarter. First, you guys have already destroyed a bunch of stretch goals.

You're getting fancy end sheets and each volume is getting two extra SECRET FILES OF DR. DINOSAUR.

You're getting 100 copies donated to libraries (my favorite).

You're getting stickers and each volume is getting two more SECRET FILES OF DR. DINOSAUR.

Next up at $100k: super rad embossed covers and blueprint wallpapers for sci-fi crazy stuff from the pages of Atomic Robo. 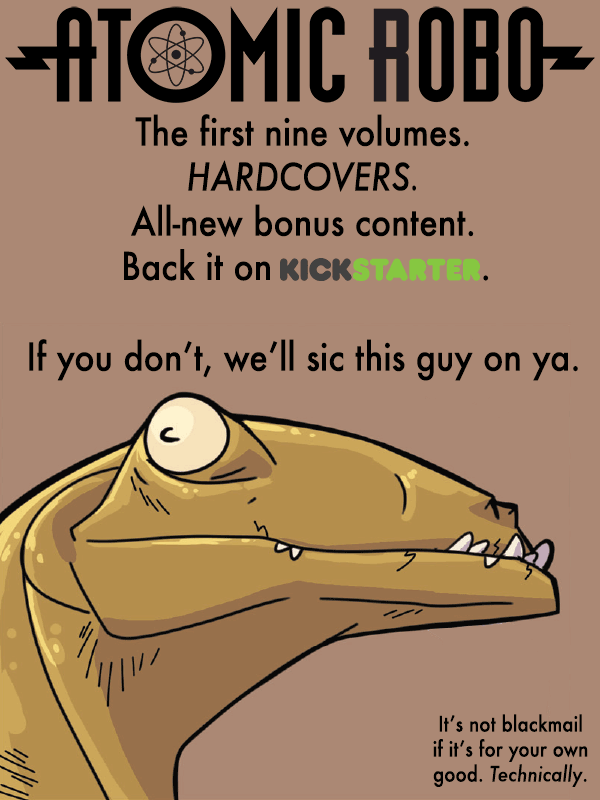 The entire Atomic Robo back catalog is online for free. This week we've been uploading our first online debut, The Trial of Atomic Robo. Next week we're moving on to the first volume to debut online, Atomic Robo and the Ring of Fire.

To celebrate, we're bringing all nine volumes back into print. As hardcovers. And we're adding all-new bonus content to each of those volumes -- THE SECRET FILES OF DR. DINOSAUR! 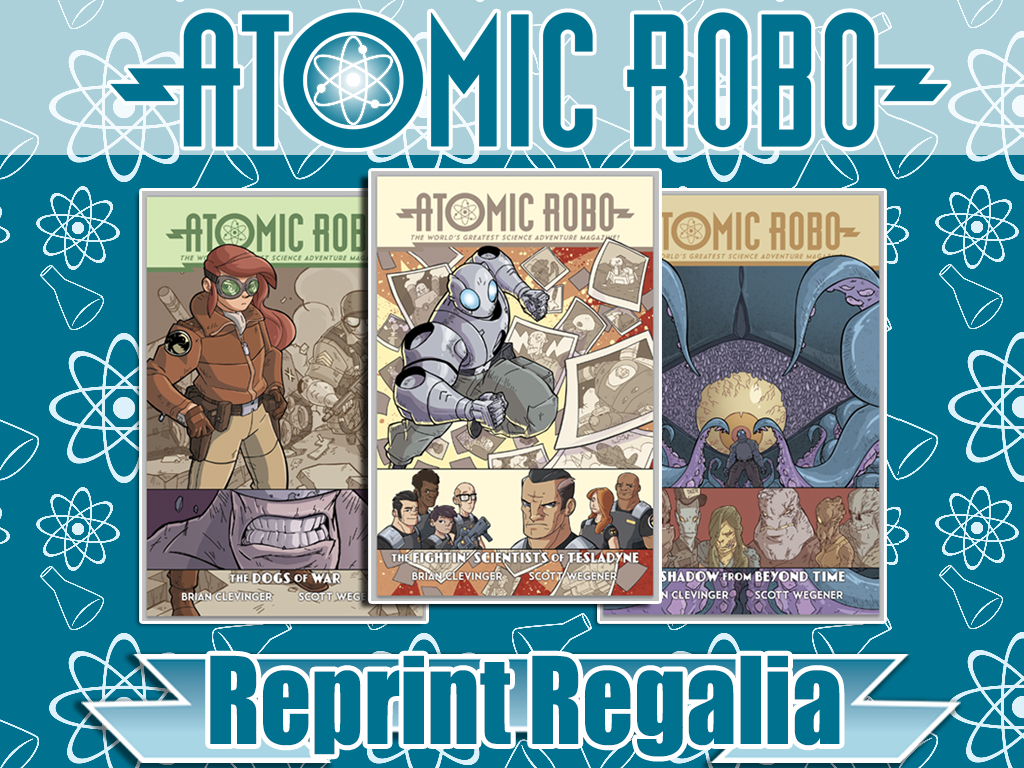 Check out our Kickstarter campaign for all the details!

We're uploading the rest of The Trial of Atomic Robo this week. You may have noticed we changed to one page per day. Hey, you couldn't have possibly expected us to keep delivering sixty-six full color pages per week.

Next week we'll start the first of four prologue mini-comics leading up to the newest storyline, Atomic Robo and the Ring of Fire.

We hope to have your continued support as we move into the next stage of sequential robot adventure art.

Hope you enjoyed Knights of the Golden Circle. I'd apologize for that cliffhanger, but naw.

Next week we'll finish up the second half of The Trial of Atomic Robo, our A Free Comic Book On A Day in 2015 special. But if you're impatient, you can always grab the whole thing at comiXology right now. 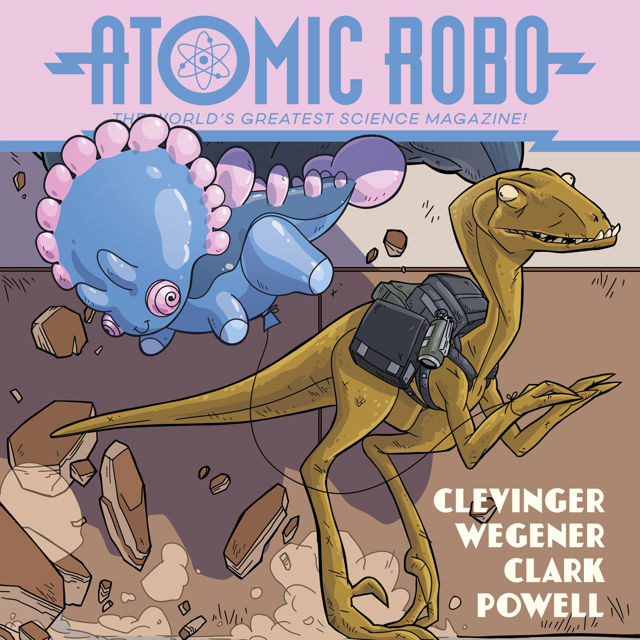 We'll release four all-new short stories. These will take us back to 2013, just after the events of The Savage Sword of Dr. Dinosaur, and help set the stage for our new storyline, The Ring of Fire. You guys have no idea how hard you want to read these pages. We can't wait to share them with you!

Hope everyone is having a great Free Comic Book Day with which we are definitely not affiliated.

By sheer coincidence, on this website where we debut comic books for free several times a week, we are giving away a comic book for free today as well! Click dat dino and score your free comic!

The first half of The Trial of Atomic Robo is online today. Wow, amazing! You'll have to hit up the good folks at ComiXology if you want the whole thing right now.

"Ahhh!" you might be wailing, "but I'm a big baby and I don't want to do the ComiXology thing!" because, let's face it, you are a big baby.

No problem, we've got you covered!

The rest of the story will go online at this very website from May 11th through the 15th. Why the wait? So we can bring you the rest of Knights of the Golden Circle without further interruption! Duhhhhhhh.

Once we've uploaded all chapters of Knights and every page of The Trial, we'll start bringing you all new Atomic Robo content that's never been seen by anyone. Ever. It's a little thing we like to call The Ring of Fire.

In case you missed yesterday's news, we're releasing all new free content this Saturday in the form of a short Atomic Robo comic book story. Perhaps you should think about visiting this website in between your Free Comic Book Day festivities to see it.

Okay, with that out of the way, let's tackle THE MAILBAG.

Here's how it works. Our Patrons submit questions and then we answer them for the good of all mankind. Join the fun.
Ok, since we've gotten to this storyline, I wanted to ask about the Magma.  Is it special in some way or were you just ignoring that the heat coming off of it should be cooking any non-robotic action scientists foolish enough to get close to it?
Michael-
It's just the magic of storytelling. Scientific accuracy can be fun and interesting. No question. But it isn't always fun and interesting.
Would it have been fun and interesting to watch Lang, Vik, and Bernard be cooked to death from the inside also while suffocating on air hot enough to boil their lungs? No, of course not.
We always prefer to err on the side of plausibility over accuracy. We have always found plausibility opens up more interesting options than pure accuracy.
Consider, for a moment, our spin-off series about Nikola Tesla's team of 19th century adventurers. One of them is Winfield Scott Lovecraft, the father of ol' H.P. Lovecraft. Is it plausible that Winfield was a Secret Service agent dedicated to investigating super science threats to the United States? Yes. Is it accurate? Lord, no, he was a salesman.
But which one is fun and interesting?
Hey Brian
Been reading your comics since 8-bit and I was wondering who your biggest influences are as a writer. Thanks!
Scott (not Wegener)
No duh, Scooty Wegs doesn't read comics for the words, so he'd never ask this question!
I had to think about this one for a while. You'd think it's a straightforward question with a straightforward answer, but it's not. Well it is, but then it isn't.
I mean, there's the obvious answer. I read Hitchhiker's Guide to the Galaxy in third grade and didn't make it past the first page before I decided to become a writer. And that lead to Terry Pratchett, P.G. Wodehouse, The Kids in the Hall, A Bit of Fry & Laurie, and Seinfeld.
Wow, that's a lot of British stuff what the hell. And it's only gonna get worse! Because I think the single largest influence on my "modern" writing is the first UK series of Gordon Ramsay's Kitchen Nightmares.
Yeah, I know that sounds strange but hear me out.
Gordon's primary concern is the customer's experience. Put another way: the meal is for the customer, not the chef, or the chef's ego.
And that's at the crux of my writing these days. These comics aren't for us. They're for you. What I find interesting to write is meaningless unless it's something that will be interesting to read. Like, there's a piece of advice, we've all heard it, that goes: create the comic (or book or game or whatever) you want to see.
And that's good advice! Great advice, really. But there's a difference between the thing you want to write and the thing someone would want to read.
I see a lot of writers mistaking the first one for the second one. And, hey, it's an easy trap to fall into! For one thing, sometimes there's no way to know the thing you're writing doesn't have an audience until it's done. For another, the act of writing is performed for an audience of one. Writing is the most solitary and self-absorbed thing you can do, so it's easy to forget that it's ultimately for other people.
The sooner you can view your own writing through the lens of What Would Be Fun For Someone To Read, the sooner you can take your ego out of the equation and deliver an exceptional experience using fresh ingredients prepared simply.
Of Cliffhangers and weekends.
Posted April 29, 2015 at 11:21 am

Hope you guys got a kick out of the cliffhanger in the previous chapter. You're lucky. You only had to wait a couple days to find out what happened next. Imangine the poor slobs who were kind enough to be reading our comics in print. They had to wait for months! But not you, no. You get to dive right in to our Back to the Future III / Tombstone crossover fanfic.

Okay, so! Saturday, May 2nd, is Free Comic Book Day.

As you may have noticed, there is no Atomic Robo story this year. This news has come as huge a disappointment to quite a few folks, and we think we can see why.

But, as always, we are thinking of you, gentle readers. Only of you.

Allow me to suggest that you check out this very website on Saturday, May 2nd, Free Comic Book Day. On that appointed day you may come across some free content that would be in addition to the usual selection of free content we give you every week.