FREDCON is a one-day show up in Fredricksburg VA this weekend. And Atomic Robo's gonna be there! The doors are open from 10am to 7pm Saturday July 15th only. The whole thing goes down at the Spotsylvania Mall. Be there or be, uh, I dunno, somewhere else. It's your life do what feels right. But if you come by, which you obviously should, we'll have some books and prints and a general selection of knicknackery.

Consider this your final warning, Hartford. Scott and I will be at Connecticon 2017, July 6 - 9. Don't call it a comeback, we've been here for years! Just not for a few years.

We'll have floppies for Temple of Od, hardcovers of almost everything else, and whatever doodads we can shove into our luggage. Scott has opened up his commission list for the show. All you got to do is PayPal fifty Earth dollars ($50) to scottwegener@gmail.com, tell him what you'd like SINGLE FIGURE ONLY and then come pick it up at the show! We'll be in the Online Media section on the Exhibition Floor with all the other cool internet people.

Been a while since I did one of these. For shame! But, hey, I was writing more comics, so that's a pretty good excuse, right?

16 Psyche is an unusually iron rich asteroid. Like 10 quintillion dollareedoos rich. Which is, for the record, more wealth than has been produced in all of human history combined. Just another reason to get serious about the Interplanetary Transport Network. Also, y'know, not turning the Earth into hellscape.

WALLABY is a telescope array that was already collecting 15 terabytes per second when it was only one-third finished. The rest of the antennae ought to be installed later this year.

MetaLimbs will turn you into a cyborg! Whoops, too late. I take the perhaps absurd view that we're already cyborgs. Yeah, that's right, all of us. How’s that? Well, we’re not used to thinking of memory, language, or culture as technologies, but they had to be invented and our use of them has vastly expanded the horizons of human ability. But, still, robot arms would be a welcome addition.

Strange Science posts are brought to you by The Best People in the World. 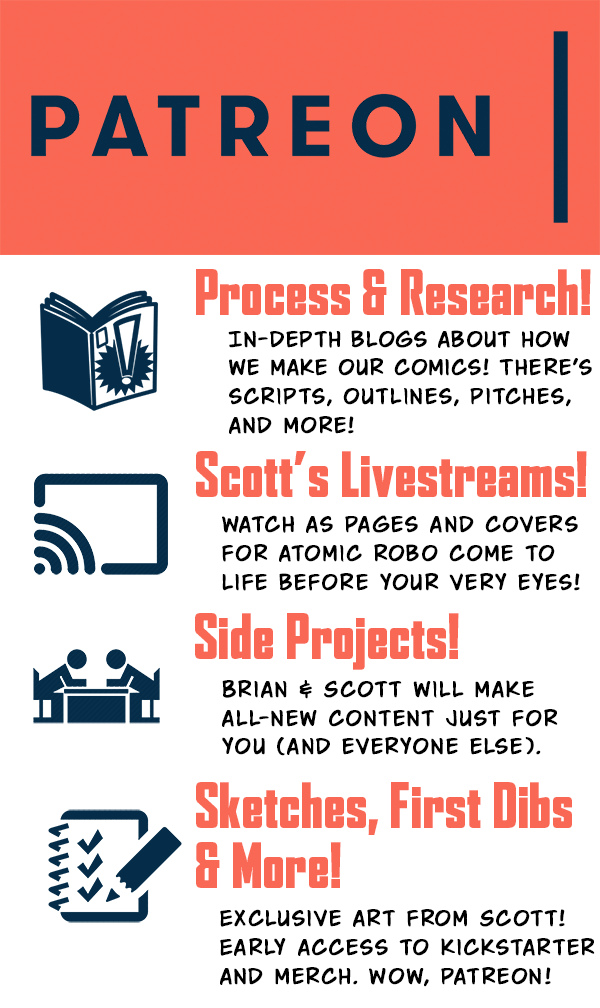 Check it out. You can pre-order a whole bunch of the upcoming Real Science Adventures comics starring The Flying She-Devils and The Sparrow right now. It's true! Just head on down to your favorite local or online shop.

What's next for RSA?

Well, that's a secret. I can say this: it'll be the deepest we've gone into history, it'll be the furthest thing from Atomic Robo we've ever done, and yet it'll be immediately recognizeable as our particular brand of adventure.

Oh, what the hell, they can't fire me. Here's a little something for your eyes too.

Our Patrons have been chewing on this and more for a while now. They're the best people in the world.

Consider this your final warning, Virginia. Scott and I will be making our first appearance at Tidewater Comicon this weekend, May 13th and 14th!

We'll have floppies, hardcovers, and IDW editions of Ring of Fire and Temple of Od! Plus whatever else we can shove into our cars and haul on over. Scott has opened up his commission list for the show. All you got to do is PayPal fifty Earth dollars to scottwegener@gmail.com, tell him what you'd like SINGLE FIGURE ONLY and then come pick it up at the show! Look for us in Artists Alley at Table 819. Here is a map to guide your travels. 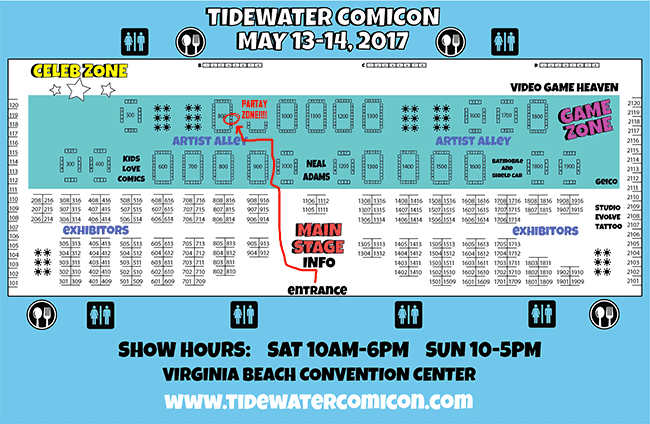 And here is the most important part of that map super deluxe ZOOMED UP. 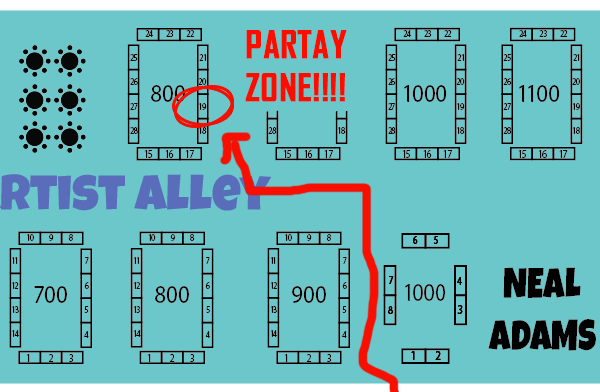 We hope to see you there!

Scott is taking pre-orders on single figure sketch commissions! Here’s what you do: PayPal scottwegener@gmail.com $50. In the comments/notes section just let him know you’d like him to draw. Remember, single figure! If you don’t specify anything, you’ll get a Robo doing something. Anyway all you have to do is drop by our table at any time during the show and tell us your name. PRESTO you got a sketch! We’re asking for the cash up front to compel you to get the thing you want!

Here is a handy + dandy map! 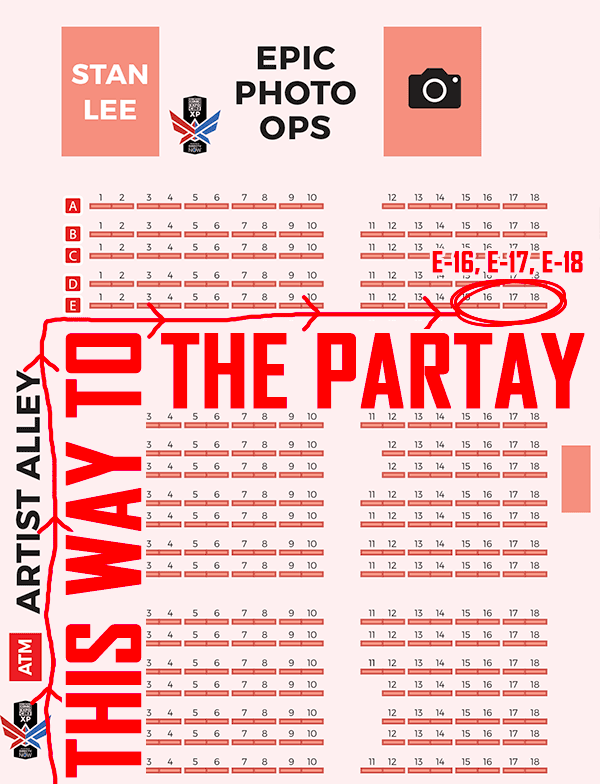 Come on by, grab some books, get some signatures on them, it’ll be a hoot. We’ll see you there.

A Brief History of the Grand Unified Theory. It’s a big read for an internet article, but worth your time if you’d like to step away from the horror show of our political landscape for a few minutes. Also you could learn some stuff or whatever.

Kenya’s BRCK. This is the future cyberpunks want.

Detective X revealed. This is the sort of thing I’m thinking about when I say that history is a goldmine filled with amazing characters.

These Strange Science posts are made possible thanks to our smart and good looking Patrons. You can be one too! It'll get you access to my PROCESSING blogs where I talk about, uh, the process of being a professional comic creator. Each week I tackle a topic that cropped up while doing the work and then talk it out.

Right now we're mere dollars away from funding some extra fiction by yours truly. I'm working on two stories right now: a swordswoman's quest for revenge and something to do with space pirates who lean closer to Bertie Wooster than Martian Blackbeard. 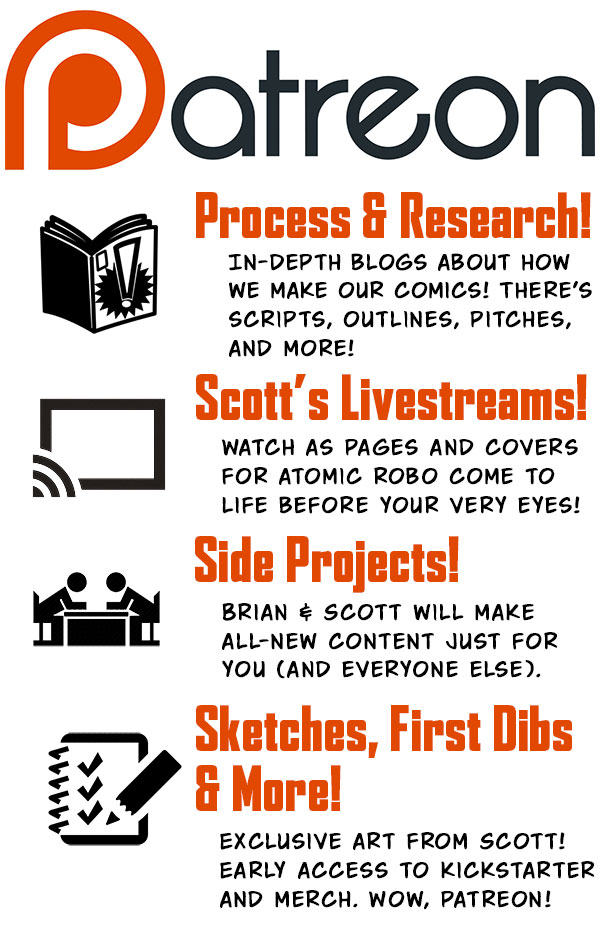 Supersonic Jets Are Back! Maybe!

The Whales are Organizing. And, I mean, who can blame them? With luck they are summoning a dread lord of the deep, sea or space, don’t care which, to bring the end of all things.

The one and only time you could doubt climate change. It was the first time we’d done a big ol’ survey of worldwide climate data. And even then warming trend was obvious. But, hey, it’s the first time this sort of thing was done. The prudent course of action at that stage is to note the irregularity, but not to panic about it yet, and to keep an eye on climate data going forward to see if it was a blip or a problem. Spoiler alert: fifty years of climate surveys have confirmed it’s a catastrophic problem.

Juice Jacking. Not, strictly speaking, new, but worth keeping in mind for those of us who spend too much time in airports.

Employers Demand Workers’ Genetic Test Results. Nothing exploitative and monstrous about that, nope!

We’re all as good as dead. These things will be a lot less cute when they’re inevitably weaponized.

Megacities Military Unit. Pretty good research for all you near-future, soft-dystopian, and slow-apoc writers. Don’t forget to add the battalion of ‘bots from that previous link.

Are Fast Radio Bursts from Extragalactic Lightsails? Decide for yourself by reading the paper. I mean, honestly, no, probably not. But it’s the sort of thing we ought to be thinking about anyway! Our search for life outside the solar system is fairly hopeless. I mean, yeah, there’s life out there. That is no longer a question in the same way it was for the first half of my life when we had no data about the existences of extrasolar planets. Now, of course, we know the galaxy is lousy with planets. From there life only needs access to energy, stability, and time. And the number of stars times the number of planets across the timeline of the Milky Way tells us that it is almost unthinkable that life does not exist somewhere else in our galaxy.

But our search has been largely concerned with detecting 20th century-ish radio signals. Given the vast chasms of space and time involved, this is frankly hopeless and sort of dumb. I mean, we should keep doing it just in case, it’s a trivial use of time and computation, but if there’s another technological civilization out there, they’ll be exploiting those kinds of signals and power levels for a small sliver of its potential lifespan. If we’re optimistic enough to assume they don’t kill themselves, they’ll spend far more time exploiting bigger and stranger technologies that ought to be easier to detect if only we get a little weird with our thinking.

Google’s AI + Blockchains = healthcare. Basically an attempt to keep medical data completely private but still useful. Drones and cyber-eyes get all the attention, but it’s the nuts and bolts stuff like this that’ll be the augmented heart fueling the cyberpunk future we’re living through.

Before we get started, I just wanted to remind everyone that Scott and I will be attending Emerald City Comicon next weekend. Scott has a limited number of sketches available so reserve yours today!

After the show we’ll start updating with an all-new Sparrow adventure with art by Wook Jin Clark.

Okay, now that we got all the business out of the way, let’s get to it!

Magnetic Spikes. Geomagnetics. How do they work? You want my opinion, unexplained spikes in localized geomagnetic activity in the Earth’s past obviously point to time travelling teenagers doing pranks to mess with historical records.

The (Legally) Blind Can See. Gonna be a weird time if we can keep this civilization going long enough for features like these to become standard issue in glasses and contact lenses.

I think we all heard about TRAPPIST-1. Or 2MASS J23062928-0502285 if you’re nasty. I’m particularly fond of the infographic and tourism posters. The universe is a weird place. Seven planets, all rocky, all roughly Earth-ish sized, and all of them orbiting their star closer than Mercury orbits our own. And yet three of them are potentially habitable since TRAPPIST-1 is pretty dang small and cool relative to the Sun. Fun fact: the Sun has about five billion* years of fuel left, but TRAPPIST is burning so low it’ll last for another four trillion years.

*The Sun will still be around, but that’s when it will have become a Red Giant and expand to engulf the Earth’s** orbit which will, uh, obliterate our planet.

**Oh, don’t worry, that’s still five billion years from now and it won’t matter anyway since all life on Earth will have died long before then because the Sun is slowly getting hotter and the surface of the Earth will be too hot to support liquid water in only about one billion*** years.

***It’s not that bad. It’s unlikely civilization even has another 40 years*^ in it.

*^Assuming a soft collapse where pockets of humanity are able to survive the post-apocalypse at subsistence levels, it’s pretty much impossible for us to ever get “back” to where we are now. The Industrial Revolution only worked because England happened to have a lot of coal/oil near the surface thanks to glaciers carving up the countryside thousands of years earlier. We’ve long since used up all the “easy” energy worldwide and now the only way to get more is by relying on an uninterrupted extraction infrastructure. Should that system suffer a global collapse, that’s it, there’s no starting it back up. The best we can hope for is getting back to about the Renaissance^ and then just hanging out there forever.

^I mean, there are worse fates. No more nuclear holocaust and Climate Change ought to phase out if not to pre-industrial levels then at least early 20th century which is a bedrock of predictability and sustainability compared to today. Hopefully we’ll hang on to germ theory^*. Hygiene will probably go down a notch regardless.
^*Look, I fucking love science too, but part of that involves being honest about the arc of current trends.
< PreviousNext >
Page 1 ... 3 4 5 6 7 8 9 10 ... 16
Privacy Policy